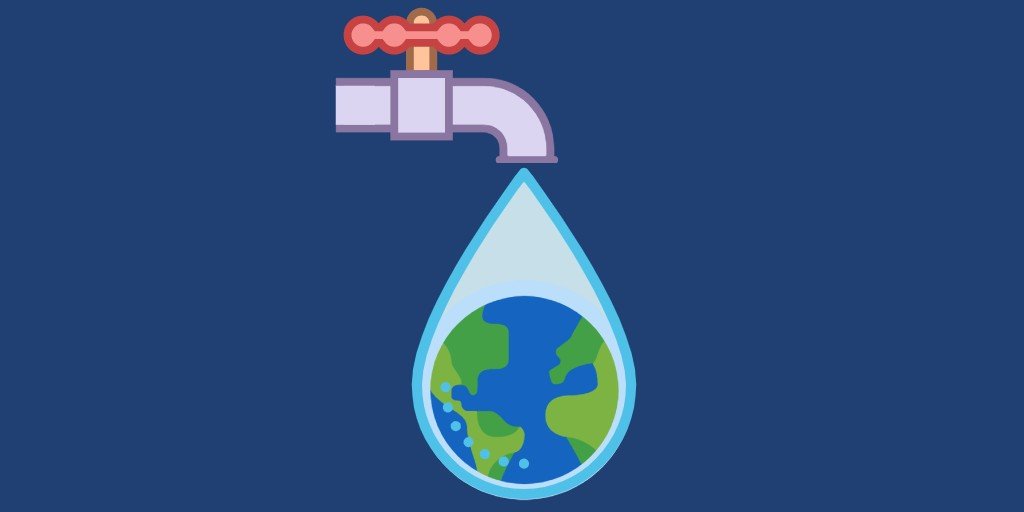 The 22nd of March is World Water Day and we’re debunking the biggest assumption about the world’s most consumed resource. As dreich as Scotland and many other places in the World can be, does that mean our water source really is infinite?

There’s 326 million trillion gallons of water on earth, which sounds like an almost unlimited amount. When you break it down, 97% of that is salt water, 2% is trapped as ice at our North and South Poles leaving only 1% as fresh water suitable for human use. Of this 1%, the majority is in aquifers, which have taken millenia to fill, found deep underground and extraction is extremely energy intensive and the rest sits in lakes, lochs, ponds, rivers and other open waterways. Typically, in the wet seasons (what feels like all year round in Scotland) our water supplies would also receive a healthy top up from rain, snow, ice and glacial melt. It sounds like plenty of water, doesn’t it?

Of the 1% of fresh water, humans use 8% in our everyday lives which according to The Energy Saving Trust is 142 litres per day by the average person in the UK. We use water in almost everything we do from brushing our teeth to showering, cooking, washing our hands and flushing the toilet. Agriculture uses up 70% to look after livestock and grow crops and the remaining 22% is used by industry to create the products we consume, from the food we eat to the clothes we wear and the device you’re reading this on.

It may sound like we have more water on earth than we could possibly need but it’s not that simple. Although aquifers do refill, it takes millenia and when they start to drain the land above is destabilised, causing major damage and the handy top ups to our water supplies from precipitation is becoming less and less predictable because of climate change.

Between 2017 and 2018, Cape Town was the first major city to go through a water crisis which almost forced the city to turn off their taps. Luckily the crisis was averted thanks to a bout of much needed rain but the city was set to ration the remaining water enforcing a queueing system for locals to collect their allowance. Cape Town may have been the first city to face a major water crisis but it certainly won’t be the last. London, Jakarta, Sao Paulo, Melbourne, Istanbul, Tokyo, Bangalore, Barcelona and Mexico City are all heading on the same course and are due to run out of their water supplies in the coming decades.

According to the United Nations, one fifth of the world’s population is now living in areas of water scarcity. This century, our water consumption has increased sevenfold and with the global population set to keep soaring, the demand will only continue to increase whilst supply stays the same as it has always been. By 2040 it is thought that most places in the world won’t have enough water to meet demand so it’s time to change the way we use and consume the resource.

A Need For Change

Now that we understand why we need to change how we manage the world’s most important resource we need to look at how we can do that. The two most effective approaches are changing our behaviour and investing in technology.

As long as the misconception of an unlimited water supply is in place, water will be used as if it is infinite. But by busting this myth and absorbing the reality that there is a finite source of water and most places will see shortages by 2050, the hope is that behaviours will change to treat water as a valuable finite commodity. Simple changes like turning the tap off when you are brushing your teeth would save 16 litres of water a day which adds up to 5,760 litres of water per year. That’s enough water to have a 10 minute shower every day for almost 2 months. With better awareness of how we use this vital resource and some simple changes, we can start saving considerable amounts of water every day before we’ve even left the house.

For industries and farming, there has been a great focus in technological advancements in recent years to offer sustainable solutions. Our recycling plant uses a wet processing system to recycle over 250,000 tonnes of construction, demolition and excavation waste per year. It’s the most effective method of separating, cleaning, sorting and grading the waste into recycled aggregates but it is water intensive.

Around half of our investment in the recycling plant has been dedicated to water treatment and recycling. Our plant is able to clean and recirculate up to 90% of the water used in the recycling process back into the plant for reuse. This dramatically reduces the volume of water needed to create recycled aggregates.

Our water supply comes from the groundwater directly below our feet via a borehole and is stored in the large holding tank you can see as you drive past our plant just outside of Pumpherston. The tank has a protective layer on the top to stop the water evaporating and being contaminated by algae growth. Its porous nature allows the tank to be topped up with the rainwater that falls on our site. We collect the surface run-off from our site via a network of drains and ditches, filter it and feed it into this storage tank to make the most of all of the natural resources we can.

It’s not just how we use water but even a step before that, how the water gets to us that can make a difference. As mentioned earlier, Mexico City is set to run out of water in the next few decades and up to 42% of their fresh water is lost before it gets through taps of the residents due to a lack of maintenance on the water supply’s infrastructure. Here in Scotland, Scottish Water has recognised the benefits of investing in infrastructure maintenance and are taking part in a project with Brewster Bros that will prevent wear and tear. The project involves collecting and recycling the waste inlet grit that makes its way into the waste water treatment works, processing it through our recycling plant to create quality recycled grit for use in the construction industry. There is also a high volume of sand used as a filter medium in Scottish Water’s waste water treatment works which can be cleaned and reused. This sand can be processed by our plant to be refreshed before going back into the system to filter the waste water, making processing more efficient. Recycling both the grit and sand is helping to maintain the infrastructure and maximise the volume of water that can be repurposed.

Where Do We Go From Here?

We now know that water is finite with the world’s population living on the 1% of fresh water. Fresh water is a dwindling resource due to the overuse of aquifers and climate change making the weather that would usually top up our supplies more unpredictable. Events like the water crisis in Cape Town and with many other modern cities set for a similar course is a signal that we need to change the way we consume and manage water.

Luckily, thanks to modern technology there’s a plethora of ways we can start making a difference and with a shift in mindset from seeing water as infinite to finite even the simplest changes can make a huge difference – you’ll probably never look at water the same or brush your teeth with the tap on again!